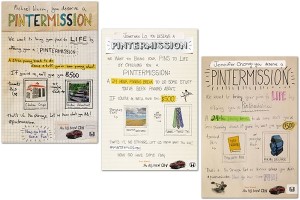 Effective Social Engagement campaigns do not have to be Facebook centric. When you consider social media sites, keep in mind that there are some (I call them passion sites) that are very effective in different markets. Reddit is a social site that attracts people who are interested in fun, quirky contents and discussions about a wide range of trending topics. They tend to be very computer and tech savvy. Pinterest, on the other hand, is great at attracting women and young couples who are pinning about a wide range of diverse passions, interests, and trigger events impacting them and their growing families. I like this case study because it features Pinterest as the focal point of the Engagement Marketing campaign and because it shows the huge impact influencers have on a targeted market.

When Honda was introducing its CR-V, they wanted to position it as a great vehicle for young people and their growing families. To accomplish this objective, they wanted to use social media (specifically Pinterest) and use key influencers (people who are heavy Pinterest users and with the persona of the best target markets for the CR-V) to engage their target audience in a fun and interesting Engagement Marketing campaign. Notice, AT NO TIME does Honda attempt to sell the CR-V. This requires some one-to-one knowledge that is not a part of Engagement Marketing. Rather, this campaign is to position the CR-V as a great potential car for this broad target market. This Engagement Marketing effort occurred in 2012.

Honda wanted to target young people, young couples, and young couples just starting their families for this marketing program. They felt this was the best target market for the CR-V product.[i] This market segment has high lifetime value, as Honda has products and services that can meet the needs of these families as they age and leave the nest. A major trigger event like becoming a family is a great point at which to gain market share for your company.

One of the key characteristics Honda found when examining this target market was that these people were extremely pressed for time—especially personal time. The demands of having a new baby in the household or raising young children means mom is stressed for time to herself. She also spends more and more time in an SUV, hauling the kids to practices, schools, and other events. Honda wanted to target these moms using an Engagement Marketing program that embraced moms and gave them an outlet to describe what they would do with some time of their own.

In this case, Awesome content was Pinterest pages resulting from an interesting challenge.[ii] Honda identified five pinners who they considered influential in their target market. These individuals were selected for the number of followers they had on Pinterest. For the campaign, Honda challenged them to take a twenty-four-hour break from Pinterest to bring something from their boards to life. Honda gave them five hundred dollars and created individual boards so each influencer could upload photos once their Pintermission was complete.

When the contest started, each of the five pinners did something with their day and then posted it on Honda’s Pinterest boards. The pinners discussed what they did that day and its impact on their lives. Honda promoted them on their Pinterest pages and on Twitter. The five Pinners increased their influence and fame by becoming a part of Honda’s fun Pin. For Honda, these individuals communicated the fun to their Pinterest followers. The influential pinners received much greater exposure than they could have without the Honda effort. Honda became a collaborator with them by including their Pintermission pages on its Pinterest board. Honda reached their target audience with a contest that was fun and Pinterest appropriate. (http://www.pinterest.com/search/pins/?q=Pintermission).

The go viral plan was contained within Pinterest, but that was enough. Each of the five pinners had significant followings on Pinterest. All five had hundreds of thousands to millions of followers.[iii] During the time period of the contest, the Pinterest page had over fifteen million impressions from a number of social platforms. The power of the influencers and their ability to drive the contest viral was impressive.

One of the things this case teaches us is the power of what I refer to as OPN—Other People’s Networks. When someone with a huge network posts something about your company on their site, it often posts on the social networking pages of their followers and, in addition, often sends them an e-mail about the new post. This creates a stimulus to read it and become involved. OPN is a great way to grow your social presence.

Honda used social monitoring to follow the contests on Twitter and on Pinterest. The contest generated over five thousand repins and two thousand likes on Facebook. The five Pinners engaged with their followers about the contest and what they did with a day without Pinterest. They engaged with Honda’s target market that further enhanced their social power while helping Honda position the CR-V for the target market.

Today, the Honda #Pintermission program is still going strong. People are still talking about how they would use their free day and sharing their experiences in their lives. You can still visit it and see how it’s engaging women today. See it by clicking here or going to this link on Pinterest: http://www.pinterest.com/search/pins/?q=Pintermission.

What Were the Results?

The Pinterest PIntermission boards were viewed by 4.6 million people. Most were in the target audience for the CR-V. Rather than quote performance data, the best way is for you to see it at work. Honda’s Pintermission program won digital marketing awards and was well received—all for a total investment of twenty-five hundred dollars. (The five Pinners received five hundred dollars each!) To see the results, take a look at this video by Mark Ragan of Ragan Communications. He is interviewing John Watts, Digital Marketing Manager at Honda, about the Pintermission program and its results.[iv] The video answers the question, “What do I do with Pinterest?” and shows how Honda used it successfully to promote its CR-V line. See it at http://youtu.be/qAqUWXXBxt0.

The Honda #PIntermission program shows how other types of social networks can be used to engage a target market. Pinterest is every effective at reaching women and was perfect for Honda. Their #PIntermission marketing program was exceptional because it addressed a deep desire of the target market to have free time and allowed them to participate in the lives of five women who were able to realize this dream. It’s a great example of how connecting with the deep seated desires of a target market, combined with a great social program, can virally reach a target market and grow your company’s social footprint within a high value market you want to develop.